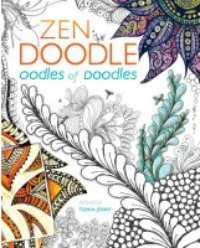 Happy to have one of my doodles in this awesome new book by North Light Books!
For tons of creative inspiration (and oodles of doodles) check it out!

The Art of Going the Distance

Simply because we’re riding down the Carolina Coastal Highway with Zac doesn’t mean we’re on some romantic trajectory. Just sayin’.

Grace’s life is one surprising roadside stop after another. Her dad is getting remarried. Her estranged (emphasis on strange) sister declares they’re going to the wedding via a road trip. And Zac, the guy next door, her forever friend and boyfriend, breaks up with her then doesn’t say a word to her for fifty-nine days, nineteen hours, and thirty-six minutes. In fact, the closest Grace got to communicating with him was the secret notebook she kept, the one that started with Dear Zac and ended as the weirdest love letter of all time (weather reports included).

But when her sister bails on their trip, Zac offers to join Grace.

Suddenly there is more than smashed pennies and an alligator named Arlo on the itinerary, because staring down a toothy reptile at dawn is nothing compared to the biggest discovery she must make. This journey will either map the end of Grace and Zac or become a whole new beginning for them.

The Art of Second Chances

Sixteen-year-old Grace Callahan was sure she was done chasing normal when she and Zac fell in love.

But old habits die hard when Grace is rejected from the art program she thought was a “sure thing”, and she projects dating expectations onto her brand new, we-are-no-longer-just-best-friends relationship with Zac. Grace is convinced all she needs is a spring break at the beach with her boyfriend, so she plans an itinerary worthy of a reality TV dating show.

Until a visitor from Zac’s past shows up, sending Grace and Zac’s relationship—and her romantic comedy agenda—into uncharted territory. Chaos becomes Grace’s guide as she navigates spring break with an uncharacteristically weepy best friend, a still-just-as-nuts-as-ever older sister, a set of parents who act like they’re in a middle school relationship, and a hot guy in a barn (who loves art as much as Grace).

And Grace has packed all of her insecurities for the trip.

Worse, she may not have Zac anymore…and she might be to blame.

But as spring break turns into a spring breakdown, and Grace finds she’s not the only one with secrets, she begins to see her friends, family, and Zac in a whole new light. And Grace discovers there just might be a second chance on the horizon.

The Art of Chasing Normal

When fifteen year old Grace Callahan starts dreaming about her best friend Zac, in a more-than-friends kind of way, life gets messy. But Grace is a pro when it comes to chaos. After years of watching her older sister rebel, Grace has learned to lay low and stick to the plan. Except she can’t seem to keep her emotions inside the lines. Her life continues to defy symmetry, and when she mistakenly kisses Zac during movie night, everything changes.

Humiliated and fearing for their friendship, Grace chases normal. She goes along with her friend Chloe’s matchmaking schemes, takes on the roles of landscaper and zookeeper in order to keep the peace in her family, and helps her high school’s Ecology Club save the environment. Grace becomes an agreeable, rain garden designing insomniac with aquamarine hair (who may or may not be a bird assassin).

Only, nothing is the same. Her dad is spending more time away from home. Chloe would rather be with her boyfriend than Grace. Her art teacher thinks she’s a fraud on canvas, and Grace’s big rain garden project is in jeopardy when she gets sucked into the middle of a school wide mascot debate.

Worse, Grace is in love with Zac.

With her family and friendships falling apart, Grace wonders if there are any rules at all when it comes to matters of the heart, or if the only way to normal is being herself.

Come Back to Me

She thought she had everything under control, that her future would always include her best friend Katie… Until everything changed.

Now her life in Bloom is one big morning after hangover, filled with regret, grief, and tiny pinpricks of reminders that she was once happy. A happy she ruined. A happy she can’t fix.

So, she is counting down the days until she leaves home for Colson University, cramming her summer with busywork she didn’t finish her senior year, and taking on new hobbies that involve glue and glitter, and dodging anyone who reminds her of her old life.

When she runs into the stranger who drove her home on graduation night, after she’d passed out next to a ditch, she feels herself sinking again. The key to surviving the summer in Bloom is unraveling whatever good memories she can from that night.

But in searching for answers, she’ll have to ask for help and that means turning to Evan, the stranger, and Kyle, Katie’s ex-boyfriend. Suddenly, life flips again, and Whitney finds herself on not only the precipice of happy but love, too, causing her to question whether she can trust her feelings, or if she is falling into her old patterns of extremes.

As she uncovers the truth about her memories, Whitney sees that life isn’t all or nothing, and that happy isn’t something to wait for, that instead, happy might just be a choice.

Available for purchase at the locations below: