So all last week I found myself thinking about a button.

My son decided he wanted to go to prom (a week before prom, mind you), which meant a last minute run for prom tickets, a boutonniere, a corsage, and a tux.

My husband suggested he try on his tux. His twenty year old wedding tuxedo.

The tux fit. It was a tad roomy, but all it really needed was a new button.

I put mending on my to-do list, but the button stayed on my mind. Somehow that button represented happy nostalgia: twenty years of marriage, family, and kids being almost all grown up.

Of course, all this symbolic button thinking took place amidst the back drop of crazy, tragic things happening in Boston and all over the world.

But I had the luxury of thinking about that button.

And then this weekend we had our own bit of crazy to deal with, when some neighborhood kids thought it would be funny to rig up what looked like a homemade bomb on the steering wheel of my daughter’s car.

My daughter drives a retired Crown Victoria police interceptor and while we wondered if this thing in her car was a stupid prank, we also couldn’t help but worry whether this contraption rigged not only to her steering wheel, but attached to the door and the outside mirror, was some threatening message aimed at the police.

So we called the non-emergency police line and an officer came to the house. He was perplexed, cautious, and called his supervisor…

Who then called the bomb squad.

And then began the process of securing the roads around our neighborhood.

And then an officer asked us if we wanted to leave our house because this could be a very dangerous situation.

At this point, one of the kids responsible, came over and confessed. My daughter instantly burst into tears. She was relieved, but very hurt someone wanted to purposefully scare her like that.

I was mad. Because while it may have been a joke–and everyone was safe–our fear had been REAL.

You may think what I did next is a strange reaction, because while the bomb squad took the stupid contraption out of my daughter’s car (they still had to consider it a threat until they knew otherwise), I went inside the house and sewed the button on that tux jacket. I didn’t know what else to do with my confusion, my anger. Maybe because I’d been thinking about that button all week, that button somehow become some sort of fastener for my thoughts. It helped to ground me.

I mean what do you do when you get tangled and tripped up by the web of someone else’s stupidity?

You can’t control it. You can’t change their thinking. All you really can do is control your own actions (and somehow resist a response that might make you a contributing member to the spectrum of stupidity).

So I shifted my focus to the things that ground me.

Turns out, one hand me down tuxedo, plus one button, equals lots of love and support. 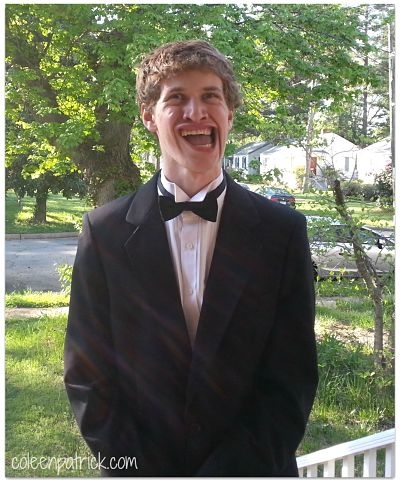 The “perfect troll face” goes to prom. 🙂  My family grounds me, but also lifts my spirit.

And because I couldn’t find a great quote for this post, I’m sharing this absurdly funny one.

What grounds you when your world gets shaky?

Have a great week,

67 thoughts on “The Heart of the Matter: What Grounds You?”