If you spend a significant amount of time creating–whether it’s writing stories, painting, or whipping up a unique batch of Brazilian cinnamon snickerdoodles, then you’ve probably heard this question:

Where do you get your ideas?

I don’t have a profound answer for that question.  If there is an idea fairy, she doesn’t come to my house.  Probably because of the way I handled those mornings when my kids noticed the tooth fairy hadn’t picked up their tooth.

Well kids, looks like there’s a fairy that needs a little sprinkling of punctual pixie dust, right? Let’s scoot on out of your room so we don’t embarrass her when she finally shows up.

Yea, I’m probably on a fairy Do Not Call list or something.

Anyway, I don’t think the idea thing is magic.  Sure those ideas show up in my head, but I know they get there via bits and pieces filtered in from my kids, the people having a conversation next to me in Panera, the TV, YouTube, the bakery in Whole Foods, the mall, the teenagers in the cafeteria at my son’s school when I volunteer.

Ideas come from a mash-up of pieces of my life, especially the curious bits.

Or as Austin Kleon says in his new book, Steal Like an Artist: 10 Things Nobody Told You About Being Creative— 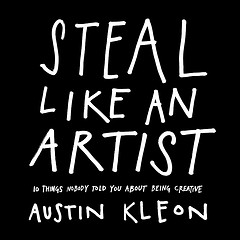 Okay that sounds like plagiarism, but the book is mostly about unlocking creativity.

But as it says in Ecclesiastes, there is nothing new under the sun.  So then what is originality?

So what if you’re at the Whole Foods bakery, lured in by the smell of baking bread and as you get closer, you smell cinnamon.

That can’t be regular cinnamon, you think gripping the handle of your shopping cart.

You look beyond the glass counter, hoping for answers.

It’s Samba cinnamon, the person robed in angelic white informs you.  Harvested only once a year during Carnival.

How festive!  So then you’re thinking, What if I make bread? No–cookies, yes cookies.  Cookies rolled in Samba cinnamon and sugar.  No–crunchy Turbinado sugar!

Before you know it you are sipping Darjeeling with a batch of warm Samba cinnamon infused cookies.  Did you make snickerdoodles?  Sort of.  It’s similar, but pumped up by the intoxicating addition of a South American spice.

It sure is nice knowing  you can roll with your curiosity rather than waiting for the Creative Genius Idea Fairy.

“All creative work builds on what came before . . . If we’re free from the burden of trying to be completely original, we can stop trying to make something out of nothing, and we can embrace influence instead of running away from it.” ~Austin Kleon

Where do you think ideas come from?  Do you steal like an artist?

43 thoughts on “Steal Like an Artist or Wait for the Idea Fairy?”